Is there any point in writing a blog entry about plagiarism? Plagiarism is apparently a simple issue: It is something that you should never do. Full stop. Still, are there aspects of academic writing that should cause all of us to be more attentive to the threat of plagiarism?

Plagiarism means copying an object, be it a text or an illustration, without citing the source. In addition, you plagiarise even if you provide the source, but render, intentionally or not, the words of others as your own (Diane Pecorari, quoted in Murray, 2017, p. 135).

To write academically means to enter into a dialogue with other scholars. You do not become a creative writer by isolating yourself from what others have written on your topic. Rather, as Joseph Harris has emphasised, your creativity as a researcher “has its roots in the work of others – in response, reuse, and rewriting” (Harris 2017, p. 2). Academic writing means to come to terms with the work of others, by translating previous research into your own language for your own purposes.

The three commonly accepted means for making visible in your own text what others have said are quotation, paraphrase and summary. “Quotation” means a direct quotation – exact copying (even of typographical errors) put in quotation marks. A paraphrase, by contrast, can be defined as an indirect quotation: it is a rendering of something you have read – ideas, reasonings, arguments, findings, theories – but in your own words. In addition, a paraphrase should not leave out any essential content. A summary, in turn, leaves out more than a paraphrase does. It focuses on the main claim that the text puts forward.

This three-fold distinction is widely disseminated on the internet, for instance at web pages of university libraries and academic writing centres. A Google search for “quotation paraphrase summary” will demonstrate this (If you prefer a reference to a book, see Booth et al, 2017, pp. 98–99, 200–201). 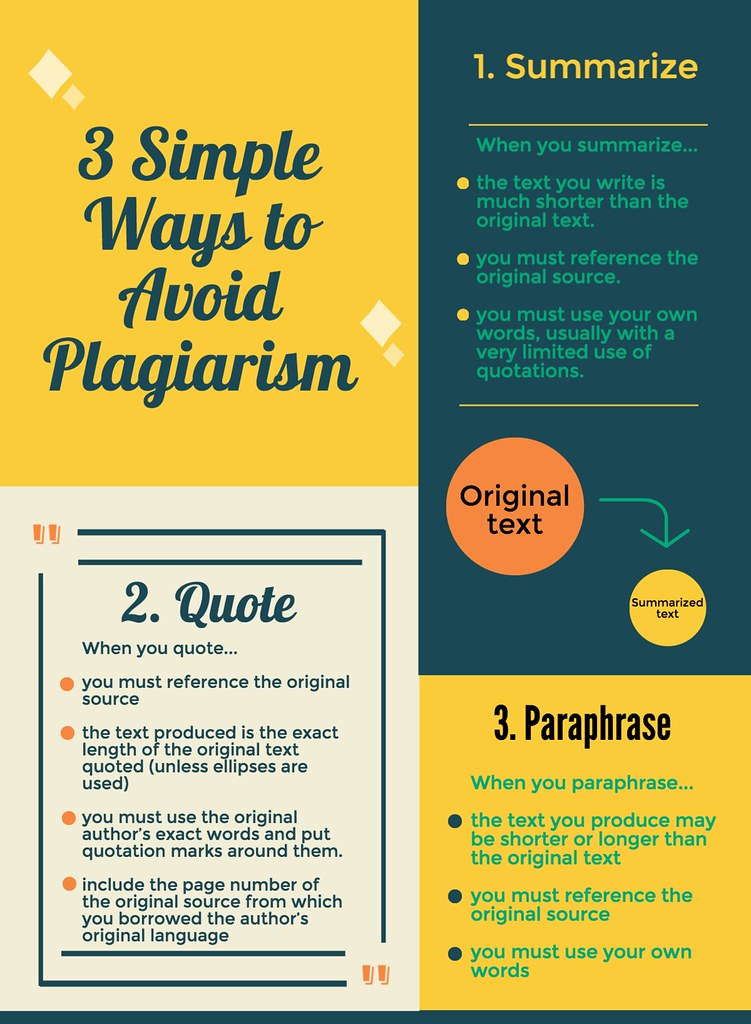 «How to Defend Against Online Plagiarism» by harrisxiong is licensed under CC BY 2.0

Although paraphrases and summaries should respect the intention of the source text, they inevitably involve an element of interpretation and evaluation. This does not mean that they are flawed. Even quotes serve to develop your own position. Whether you quote, paraphrase or summarise, the aim should always be to shed light on your own question, not simply to repeat what others have already said.

Using your own words and not

However, the distinction between quotation and paraphrase is not necessarily an easy one. When can you be sure that you have captured the ideas of others and rendered them truthfully – in your own words? Due to this uncertainty it can be more convenient to quote, as you then will be perfectly open about your use of what others have said. You put your source clearly on display.

On the other hand, extensive quotation is bad academic writing. Ask yourself: how often do you really read long quotations? Are you sure you do not skip them, as the author of this text tends to? Quotes are best reserved for contested points that your colleagues have made, and for what you would like to discuss further. Remember that quotes will never do the job for you (Harris, 2017, p. 21). Paraphrases are therefore the preferable option in most cases. However, you must make sure that you are really paraphrasing and not plagiarising.

For most writers, however, this phase of the thesis is more about “seeking” than finding, but you can do writing to move forwards. Use the freewriting and generative writing strategies from Chapter 3 to help you move beyond the fragments of a thesis by having several attempts at pulling them together. They allow you to write – briefly – about the idea of your whole thesis. They can help you find the type of story that your thesis will tell.

It is possible to use freewriting and generative writing strategies to help you move beyond the fragments of a thesis by having several attempts at pulling them together, to allow you to write – briefly – about the idea of your whole thesis and help you find the type of story that your thesis will tell.

The second paragraph plagiarises the first. It is presented as the (fictitious) author’s own writing (paraphrase), but a comparison with the first paragraph shows that it is clearly not. The minimal changes are cosmetic only, and hence insufficient. To add a reference does not solve the problem, it remains plagiarism. In this case it should have been replaced by a direct quotation. (For examples of how to properly summarise, paraphrase and quote the first paragraph, see Murray, 2017, p. 134.)

It does not matter whether plagiarism is intentional or not, it is in any case plagiarism. Thus, when working and writing academically you must be aware of the situations that may lead to unintentional plagiarism. Not remembering where we have read a certain interpretation is something that many of us have experienced. Who was it that made the claim that the ideas of the French Revolution were truly universalised with the slave revolt on Haiti in 1791 only? Carefully taking notes is one way to avoid this problem.

However, even taking notes can be a source to plagiarism if they get mixed up with your own, proper writing (Murray, 2017, p. 136). Unintentional copying easily becomes part of your dialogue with other scholars when you combine reading up and writing up. This is not meant as an excuse for doing it, only an explanation.

Practices like these bring Murray to the issue of patchwriting. Patchwriting, too, is considered plagiarism (Murray, 2017, p. 126; see also Lund University, 2011). But what is it, apart from plagiarism? Rebecca Howard, who has devoted much of her research to this phenomenon, defines it as “copying from a source text and then deleting some words, altering grammatical structures, or plugging in one synonym for another” (Howard, 1999, p. xvii).

Patchwriting, Howard argues, is likely to occur when you try to enter the academic culture from the outside. It is characteristic of situations when you are faced with a new and especially difficult topic, often also formulated in an unfamiliar and complex idiom. In such cases it takes a lot of effort to reach a level of understanding where you are really able to use your own words. Instead, your own fragments of patchwriting may unintentionally reoccur in your texts intended for submission and dissemination.

In fact, Howard challenges the idea that patchwriting is plagiarism, which she sees as a reflection of the modern but romantic notion of individual creativity. She tries to understand patchwriting not as the intention to steal, but as imitation and thus an inevitable part of a learning process. According to Howard, it is “something that all academic writers do” (1999, p. xvii), and she argues that our academic culture should distinguish it from plagiarism proper, that is from intentional copying, and reconsider it as a positive learning strategy.

Likewise, patchwriting borders on other techniques recommended for learning and in particular for getting started with your writing. I am thinking here of what in Norwegian is called tenkjeskriving (Dysthe, 1993, p. 274), that is explorative writing or “thinking-writing” (for “thinking-writing” as an apt translation of tenkjeskriving, see Rettberg, 2009). Thinking-writing is not intended for the eyes of others, it is informal writing you do for yourself, where the goal is to learn more. Moreover, it will often function as a preliminary stage to presentation writing. The danger, however, is that fragments of patchwriting remain in your text.

The point here is not to argue that practices such as thinking-writing inevitably lead to plagiarism and therefore cannot be recommended. It has proven useful to people who struggle to get started. And if you find imitation to be a productive mode of learning, you should feel free to use it, but at the same time be aware that individual intellectual property and copyright are essential to our academic culture, as is the quest for originality, in terms of providing new insight. Patchwriting might be a useful tool to some, but it is precisely that – a tool to get further. Thus, in order to develop your own scholarly voice you need to continually rewrite your own texts, also those that you started working on while familiarising yourself with an unfamiliar topic.