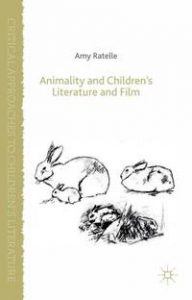 The monograph Animality and Children’s Literature and Film by Amy Ratelle is an investigation written from a posthuman and animality studies approach that aims to explain the permeability and fluidity of the boundaries between humans and other animal species in popular children’s books (4). One of the main aspects Ratelle is focussed on is the identification of children with animals: the overlapping rhetorics addressing children, childhood and animals, and also the paradox of asking children to be identified with real and fictional animals, but making them position as human at the same time (10).

Some of the theories included are Donna Haraway’s model of “companion species” and “natureculture” from When Species Meet (2008), A Thousand Plateaus’ by Gilles Deleuze and Félix Guattari (1987) – both referents avoid the traditional superior position of humans over other animals –, Jacques Derrida’s “carnophallogocentric paradigm” from “‘Eating well’ or the calculation of the subject” (1991) and also his discussions about how language has been used to differentiate animals that are non-human from The Animal That Therefore I Am (2008), related to the also cited Akira Mizuta Lippit’s Electric Animal: Toward a Rhetoric of Wildlife (2000), Temple Grandin’s Animals in Translation (2005) about autism and animal behaviour, and Giorgio Agamben’s concepts of “zoe” and bios” from Homo Sacer: Sovereign Power and Bare Life (1998).

The first out of five chapters, “Animal Virtues, Values and Rights”, is devoted to compare the origin of animal rights advocacy and legislation – especially regarding horses – and the children’s rights movement since the 19th century. Special attention is given to animal rights and to what extent works such as Dick, the Little Poney (anonymous, 1799) and Black Beauty (Anna Sewell, 1877) defend them, often according to the social context when they were written. By continuing her analysis of how domestic animals had culturally been seen as labour, chapter 2, “Contact Zones, Becoming and the Wild Animal Body”, aims to address how the anthropomorphized animal body has recurrently attributed human values in children’s fiction – for instance, the pacificity of cow and sheep or the loyalty of dogs – and what assumptions about the relations between animals they have conveyed. This chapter mainly analyses these aspects in The Call of the Wild (1903) and White Fang (1906) by Jack London and the film Princess Mononoke (Hayo Miyazaki, 1997). It is specially interesting her description on what wolves have symbolised along history.

Chapter 3, “Ethics and Edibility”, deals with meat consumption and how children can identify with farm animals, and essentially provide the reader with some debatable theories about the industrial farming and their application in analysing the novel Charlotte’s Web (E. B. White, 1952) and the films Babe (Chris Noonan, 1995) and Chicken Run (Peter Lord, Nick Park, 2000). Therefore, this chapter can be useful to interpret the role of edible animal in children’s fiction. This topic is tightly linked with animal experimentation, the subject from the fourth chapter, “Science, Species and Subjectivity”. Ratelle presents a wide range of discussions on how technological progress has experimented with animals and what have been their rights. With this chapter, readers can interrogate themselves again about the boundaries between humans and other animals and about why the aptitude for human language can be used to identify animal subjectivity. One stimulating idea from the study of the novel Mrs Frisby and the Rats of NIMH by Robert C. O’Brien (1971) and the film The Secret of NIMH by Don Bluth (1982) is how featured animals are skilled at human language and take advantage of it.

The last chapter, “Performance and Personhood in Free Willy and Dolphin Tale”, analyses Free Willy by Simon Wincer (1993) and Dolphin Tale by Charles Martin Smith (2011) in order to understand why films like these have promoted legal personhood rights for marine mammals. Ratelle uses the animal subjects in films and real live to advocate for a concept of identity that goes beyond the human / non-human binary. This chapter can be relevant to explore the legal personhood rights for animals and, like in the previous two chapters, to access a rich compendium of theories on animality.