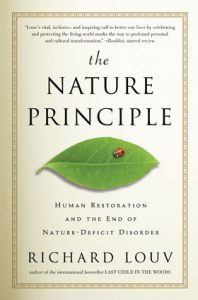 In the book The Nature Principle. Human restoration and the end of Nature-Deficit Disorder (2011), Richard Louv delivers a powerful call to action – this time for adults. This book follows up on his bestselling book from 2005, Last Child in the Woods, which sparked a national debate and an international movement to reconnect children and nature. (See the NaChiLit-blog from Marianne Presthus Heggen 05.07.17).

Louv is a journalist and the author of many books about the connections between family, nature, and community (www.richardlouv.com). He is also the founding chairman of the Children & Nature Network which also has a blog http://www.childrenandnature.org/learn/news-center/ and https://www.facebook.com/childrenandnature

In The Nature Principle, Louv points out that the more high-tech our society becomes, the more nature we need. He claims that nature is important for human intelligence, creativity, and mental health; and that our physical, emotional and family fitness depends on our proximity to nature and time spent in nature. He supports his arguments with stories from his own and his family’s experiences outdoors, on various trips in the local environment and on longer excursion into the wilderness. Louv also refers to various written sources to support his arguments. He draws upon research projects, published articles and books, and a large number of other media publications, to clarify his statements. The book has a long and particularly interesting chapter with notes, suggested reading and an index.

In The Nature Principle, Part one, Louv highlights what he calls ”nature neurons”. He claims that time spent in the natural world, both restories and stimulates the brain,and this may lead to bursts of new neurons, «nature neurons». In Part two, he discusses the role of Vitamin N for human beings and our development. In Part three, Louv considers sustainability and sustainable happiness, as well as how to take care of the nature and the local environment, and live better by using less. In Part four, he considers the nature principle at home, and starts by saying that nature is not a place to visit, it is a home. Louv gives examples from places such as The EcoVillage organic garden, where people again take pleasure in working the land. In the last part of the book, Part five, Louv calls upon the reader to look forward: «Making a Living, a Life, and a Future» (p.239). There are many networks, organisations, clubs, programs, teachers and people talking about a human-nature reunion, so a lot of research has been carried out. Now it is time to connect all this: «What if family nature clubs really caught on, like book clubs did in recent years?» (Louv, 2011 p. 263).

To summarize the book, Louv identifies seven basic concepts that can help us reshape our lives and he considers how humans can reshape their lives now and in the future:

The book is relevant in the NaChiLit-research group. Perhaps the most important message to the reader is to reconnect humans with nature: «Nature can help us feel fully alive» (Louv, 2011 p. 6). In this book, Richard Louv uses some of the same sources as the research group NaChiLit, and he has found his own way to use them in his discussion for nature-smart communities. Louv is aware that «permanent cultural change will not take root without major institutional and legislative commitments to protect, restore, and create natural habitat on a global basis» (p. 264.).