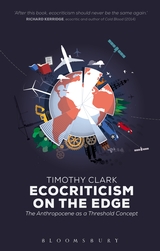 The first chapter “The Anthropocene – Questions of definition” offers a history of the term, though he focuses mainly on the cultural, ethical, aesthetic, philosophical and political aspects of environmental issues in the Anthropocene. Clark claims that the Anthropocene “blurs and even scrambles some crucial categories by which people have made sense of the world and their lives. It puts in crisis the lines between culture and nature, fact and value, and between the human and the geological or meteorological” (p. 9).

Clark investigates environmental ethics and points out the disjunction of our ‘normal’ scales of space and time, between the “planetary environmental realities and those things that seem immediately to matter to human engagement from one day to another” (p. 30). The matter of scale is at core in Clark’s reading and permeates the book.

In the subsequent chapters Clark addresses such issues as new perspectives on readings of poetry, novels and short stories. In chapter six he discusses a post-colonial experience in Australia by in a close reading of Henry Lawson’s ‘Telling Mrs Baker’ (1901) exemplifying the limitations of postcolonial criticism in light of the Anthropocene. This reading as the other readings of literary texts in Ecocriticism on the Edge: The Anthropocene as a Threshold Concept serve as good examples of issues prevalent in the Anthropocene. The book includes analyses of literary works, including texts by Paule Marshall, Gary Snyder, Ben Okri, Henry Lawson, Lorrie Moore and Raymond Carver.

In the final chapter “The tragedy that climate change is not ‘interesting’” Clark problematizes the challenge of arguing the large-scale scope beyond people’s everyday lives. Clark also discusses how readings of literary texts challenges, “what may and may not be environmentally significant” in re-readings of texts.

Despite the fact that Clark’s book does not deal with children’s texts the notion of the Anthropocene is clearly relevant and of concern within the scope of readings or perhaps re-readings of children’s texts.