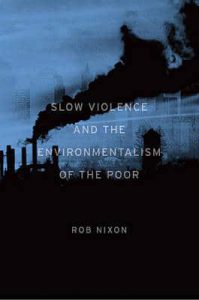 Nixon’s concept of slow violence is inspired by Johan Galtung’s idea of structural violence, a form of violence not attributable to a single individual, but rather to social inequalities of power (Galtung 1969). Slow violence likewise denotes “a violence that occurs gradually and out of sight, a violence of delayed destruction that is dispersed across time and space, an attritional violence that is typically not viewed as violence at all” (Nixon 2011, 2).

One of Nixon’s illustrative examples is the 1984 disaster at the Union Carbide factory in the Indian city of Bhopal. As toxic gas leaked out, thousands were killed, and the pollution will continue to affect the inhabitants for decades. How many people have ultimately been killed or injured, and how can one prove who is responsible for the death of a given individual? Answers to these questions will be delayed and contested: “Maintaining a media focus on slow violence poses acute challenges, not only because it is spectacle deficient, but also because the fallout’s impact may range from the cellular to the transnational and […] may stretch beyond the horizon of imaginable time” (p. 47). Hence, one of Nixon’s main issues is the problem of understanding and staying attentive to ecological drama, as it is often unspectacular in aesthetic terms.

Slow violence, then, disproportionately affects the poor of the global south, those lacking the means to leave areas suffering the consequences of toxic pollution. As it hardly fits into narrative templates, slow violence also eludes memory and activist consciousness. The global poor therefore seem to be “dispensable citizens,” dispossessed of natural resources by multinational corporations, and forced to suffer the direst consequences of ecological damage. Thus, Nixon’s book integrates a postcolonial social justice perspective with ecological and ecocritical thinking. As such, his analysis is one of the most influential examples of what might be called global or cosmopolitical ecocriticism (Marland 2013).

The bulk of Slow Violence consists of contextual and close readings of “writer-activists” who “share a desire to give human definition to such outsourced suffering” while demonstrating “a desire to give life and dimension to the strategies–oppositional, affirmative, and yes, often desperate and fractured–that emerge from those who bear the brunt of the planet’s ecological crises” (p. 22–23). By studying novels and essays by authors such as Indra Sinha, Ken Saro-Wiwa, and Arundhati Roy, Nixon shows how texts can make slow violence perceptible, while also prolonging the attention given to events that are not typically identified as dramatic or spectacular.

Nixon’s book attempts to couple the questions and methods of literary studies with arguably the most pressing global problem of our age. Slow Violence provides a provocative framework for thinking about ecological narratability and the issue of attention in climate change activism.

Nixon, Rob. 2011. Slow Violence and the Environmentalism of the Poor. Harvard University Press.

05.08.2019 by Per Esben Myren-Svelstad, Associate professor, NTNU in Trondheim