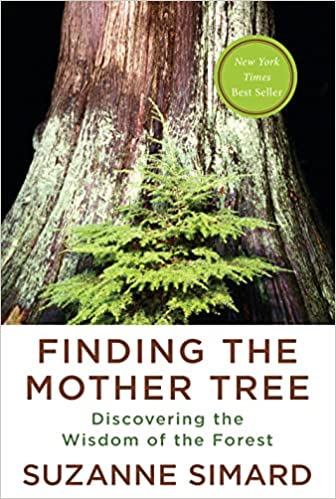 Suzanne Simard, a Canadian, is one of the most influential forest ecologists of the past thirty years. Her discoveries about the mycorrhizal network connecting the root systems of forests, for which she coined the term the “wood wide web,” have inspired several popular science books, including Peter Wohlleben’s well-known The Hidden Life of Trees. She was also the inspiration for a character in Richard Powers’ arboreal novel The Overstory (2018). Rob Nixon (2021) speculates that her discoveries about the interconnected nature of forests have been so resonant because, in the face of the climate crisis, many people are ready to let go of individualistic and competitive notions of self and meaning, and are seeking new ways of imagining and embodying community. The intricately enlaced roots of forests provide precisely this.

Finding the Mother Tree is an autobiography that puts Simard’s scientific discoveries in the context of her life and family history. Her attitudes towards trees are an intriguing mix of the pragmatic, the scientific, the intuitive, and the mystical. Born into a family that has been logging for generations, Simard is at ease with the fact that humans use trees to build livelihoods. She explains that as a child she chewed the rich humus of the forest floor, a trait for which her siblings never teased her. She writes: “I can’t tell if my blood is in the trees or if the trees are in my blood” (Simard 2021, p. 25). As a young female ecologist in the male-dominated forestry industry, Simard is eager to prove herself as competent and trustworthy as “one of the boys,” but she is disturbed by the devastation caused by clear-cut plantations, and troubled by the fact that the roots of newly-planted saplings seem reluctant to connect with the earth.

The book is fascinating for a number of reasons: the insights into mid to late-twentieth-century logging culture, the descriptions of the mycorrhizal fungi that attach to roots of trees and assist the exchange of nutrients, and the accounts of Simard’s detailed and decades-long experiments that demonstrated the integral role the mycorrhizal fungi plays in sustaining communities of multi-species forests, in direct contrast to the assumptions of the logging industry that “competing” species should be removed. The book also addresses the issue of gender. In addition to describing the challenges Simard faced in establishing herself in—and questioning the foundations of—a male-dominated industry, the book reflects on Simard’s relationship with her mother and her own two daughters, including her decision to spend significant stretches of time away from them as they grow up, in order to devote herself to her research on forests.

The “mother tree” of the title refers to the enormous, ancient trees of the forest whose roots support the development of the saplings and the younger trees around them. Simard discovers that old and young trees communicate with chemical signals passed through fungal networks—similar in many ways to the neural pathways in our own brains. She writes: “the old trees nurture the young ones and provide them food and water just as we do with our own children” (Simard 2021, p. 5). Simard decides to call these trees “mother trees” despite the fact that that they aren’t exactly female because the word “mother” speaks to her own experiences of care and nurture: “The hubs were Mother Trees. Well, mother and father trees, since each Douglas-fir has male pollen cones and female seed cones. But … it felt like mothering to me” (Simard 2021, p. 228). In 2013, Simard gave a talk on Mother Trees to a group of fourteen-year-olds. It was posted on YouTube, and was successful enough that she was invited onto TED Talks’ main stage two years later. She writes: “I struggled with anthropomorphisms that I knew would be criticized by scientists, but I chose to use terms such as ‘mother’ and ‘her’ and ‘children’ anyway to help the kids understand the concepts” (Simard 2021, p. 274). Her choice to anthropomorphize the trees contributed to the popular dissemination of her research and struck a chord with viewers and readers around the world.