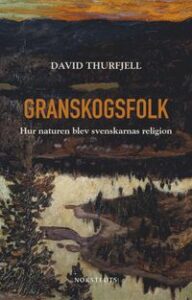 Nature in general, and the woods in particular, are essential to Swedish society and culture. In fact, trees and forests are so crucial to the modern, primarily secular Swedes and their self-image that this type of natural landscape could be regarded as a national religion in contemporary Sweden. This is the central thesis presented by David Thurfjell (professor in religious studies) in Granskogsfolk. Hur naturen blev svenskarans religion (“People of the spruce woods. How nature became a religion to the Swedes”)

Thurfjell asks why rural landscapes such as the pine woods appear to be the sphere most Swedes choose when seeking places for existential reflection, what these spiritual experiences are like, and how this orientation toward the rural parts of society has become so widespread among the modern Swedes.

To answer these questions, Thurfjell turns to two types of sources. To find out how the Swedes of today think of and experience nature, he has interviewed 72 of the hikers he has met while strolling in the forests surrounding Stockholm. These contemporary reflections are contextualized through a comprehensive cultural-historical analysis. Based on a variety of historical, religious, philosophical, and psychological studies, as well as examples from the Swedish literary canon, Thurfjell presents the Swedes’ relationship with nature throughout history. This journey begins in the mythical landscapes of Norse society, pass through the conflicting ideas of the holy as something beyond, but also within, the material world during the Christian era, continues to the secular instrumentalization of nature in the industrial period, and ends up in the existential paradoxes of the Anthropocene. Even though much of this narrative is familiar, at least to readers interested in images and stories about Scandinavian nature, Thurfjell’s spiritual history of Sweden demonstrates the critical insight that nature is indeed a crucial part of what we conceive of as culture.

From the perspective of literary studies, it is interesting to note that the many quotes from well-known Swedish poems, novels, and songs included in Thurfjell’s argument reflect a remarkably richer and more nuanced way of expressing the profound and significant experience of connection between human beings and their natural surroundings, compared to the urban “new age”- discourse influencing many of his informants. The poem from which Thurfjell has borrowed the title, Granskogsfolk, is a telling example of how precise, but uncomplicated all the same, literary language can be:

However, those (of us) who hoped the title Granskogsfolk referred to a religious history connected to trees or spruces particularly will be disappointed due to the general scope of Thurfjell’s examination. As Thurfjell admits himself, the words “nature,” “landscape,” “forest,” and “spruce woods” are used synonymously. Nevertheless, there are some passages where connections to trees as such, and even certain species, are given particular attention.

Oe such example is a section on “Kärleken till träd” (The love of trees), where the author discusses a tendency among his informants to establish friendly relations with trees. Several of them report conversations with trees, and one expresses that she looks upon trees as persons “with a real personality” (p. 43). Thurfjell enriches these testimonies with parallel examples in texts by canonized Swedish authors such as Artur Lundkvist and Sara Lidman.

A section on the powerful Swedish timber industry reveals a far more problematic perspective on trees. During the 1950s, 1960s, and 1970s, vast parts of the Swedish woods were treated with the same pesticides used as chemical weapons in the Vietnam War. The long list of “unwanted” plants mentioned in the marketing campaign for these products (including common species such as birch, hazel, and willow) effectively explains why monoculture is one of the most significant threats to biodiversity in Scandinavian forests today.

Thus, even though Granskogsfolk does not contribute much new knowledge, neither about the spiritual history of Swedes or their relation to spruce, it is a well-written reminder that the natural landscapes we walk through, read about, and dream of are central to what it means to be a human being.